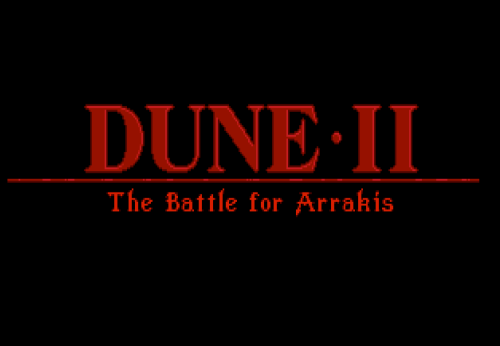 Dustin was going through a Dune phase around this time.  He’d been reading the series books and we’ve both seen the 1980s movie based on book.   I was familiar with the movie at the time by David Lynch but I hadn’t read any of the books at that point.

This gave me a frame of reference as to what Dune was about, and a game based on popular book series seemed like natural progression our mutual Dune interest.

The game was released in 1992 by Westwood Games for the PC and Amiga.  As to which system I played the game on first, I don’t remember, I remember the PC version having the voice overs when I played it.

When the game came out, I played it all the way through with Dustin and we switched back and forth one person playing, the other person watching.  We’d assist each other with specific missions in the game.  I recently got turned on to DOS Box and I’ve been playing the game again on the Mac OS X. 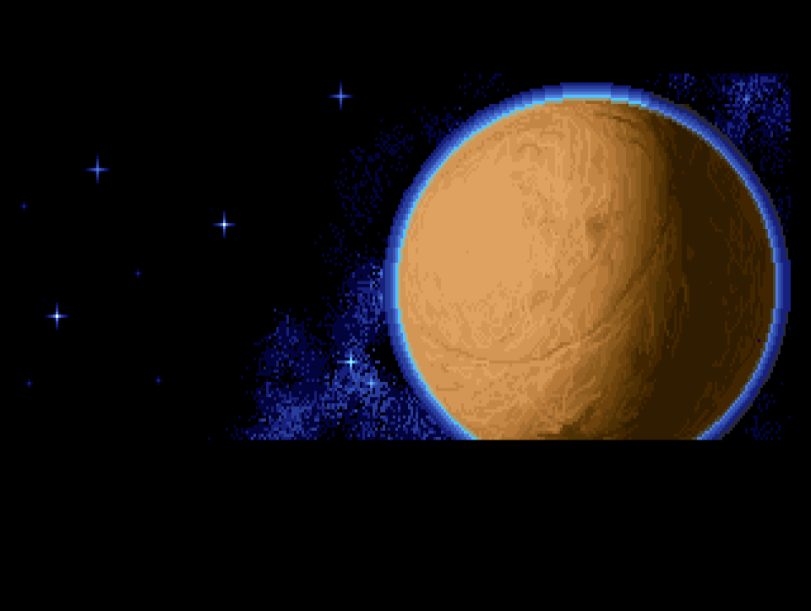 The game included a story introduction.

Dune II was the first strategy game I played on the computer I really liked.   I remember the game being billed as a “real-time strategy” on MS-DOS.  It was a really interesting move because the game required you to juggle many different tasks all at the same time, like collecting resources, sending troops into a battle, building new faculties and upgrading equipment.

Before Dune II, I had been playing Military Madness on the TG-16, which was more of the traditional turn based strategy game you would have come to expect on the computer or gaming system.   I must have missed Warcraft when it originally came out, but Dune was a huge advancement over a day like Military Madness because of the real-time component.

Dune II certainly got me interested in later games like Warcraft II or Starcraft from Blizzard years later.

The original Dune game was only interesting, to put it mildly.  I remember some of the character animation being very impressive, but the Dune game never got me interested.  When Dune II came out, I thought, “okay, they scraped the original idea and tried something new” which they did.  Dune I and Dune II couldn’t have been any more different from each other.

Your mentat guide helps you completed your missions for the spice.

One of the most interesting features of the game is the introduction of three races into the game.  The Atreides, the Harkonnen, and the Ordos are all playable races in the game.  Each race has some minor differences in their technologies, there are not vast differences.   Never before had I had the option of playing as the good guys, the bad guys, or the “questionable” guys.  This feature would later be assimilated other games, like Starcraft, have three or more varied races, but at the time, it seemed very groundbreaking.

I don’t specifically remember in the original version I played if the game had the voiceovers in the introduction of the game, but I do remember it having the animations which I hadn’t again really seen on the PC much up this point.  It was something I’d only really seen on the TG-16 with its CD-Rom system. 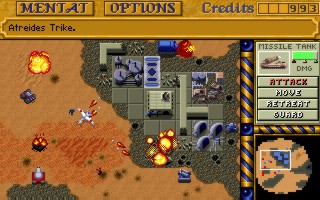 The animations and voice component included in the game were becoming more common in video games due to better processors, more memory and more storage capacity on the average PC, marking another step in video game evolution.

I know that Dustin was very interested in the Dune book series around this time when the game was released.  He’d been reading the books and was actually running a local bulletin board system (BBS) in the Flint area called, Arrakis.  It was marked by the impressive ANSI version of the great sand worms of Dune and other great moments from the books.  I look at this game and it reminds me of the BBS and the time spent discussing the books and movies with him.