At the time, I was only really starting to get into my Commodore 128D and playing around with the mouse and higher resolution video modes of the system using GEOS.  But as it turned out, the world was moving into the 1990’s and that meant my 128D was already woefully obsolete.  Game companies were moving to 256 color VGA resolutions, requiring larger storage capacities, incorporating better sound quality, and the Commodore 64 and 128 did not foot the bill when it came to the next generation of video games.  Commodore had a line of computers called Amiga, but like the Apple Macintosh at the time, they tended to be more expensive for a really good quality one.  I saved my money to get the entry level computer called an Amiga 500, which I was able to get for a relatively small amount of money (I think $500 or so), and I was back in the game, but the first game I got was Secret of Monkey Island.

My first version was a number of 3.5 inch 1.44MB floppy disks.   You’d start playing the game on Disk 1 and as the game progressed, it would stop and prompt you to “Insert Disk 2” and wait for the player to change the disk before it would proceed.

You forget about that in this modern age of every single diskette I owned going on a flash drive the size of a pack of gum.  LOL.   The last time I purchased the game was MI: Special Edition for iPad and the game was a completely downloadable with improved high-res graphics, full-voice acting and CD quality audio tracks.  You’d never be able to accomplish that one 3.5 inch 1.44MB floppy disks.

Monkey Island is probably one of the most visible graphic-adventure or point-and-click games out there on the market.  It’s been ported to many other systems, including the iPhone, iPad, Mac, PC, and Sega CD. 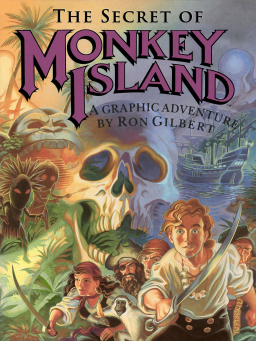 I’ve played Secret of Monkey Island for the Amiga, the PC, the Mac, and the iPad/iPhone.  The Secret of Monkey Island was released in October 1990 for Amiga, PC and Mac, all of which I’ve played from start to finish.  When the MI: Special Edition was released in 2009, I purchased on an iPad for the purpose of playing it.  I also own the Special Edition version for the Mac App Store.

I had completely loved Maniac Mansion, but Zak McKraken and the Alien Mindbenders and Indiana Jones and the Last Crusade games had left me feeling a little bit flat from LucasArts.  Zak and Indy were both pretty good, but they lacked something.  Zak wasn’t all that fun or funny, and in Indy, I disliked the hand-to-hand fighting.  Many times I’d get my ass handed to me and I’d have to restart from an earlier point in the game.  Secret of Monkey Island solved both of those problems and added some new features.  The game was a next level in graphic adventuring for me.  Let me see if I can explain.

You play as Guybrush Threepwood, a wannabe pirate, on a mission to gain acceptance as a pirate on Melee Island, somewhere in the heart of the Caribbean.  Guybrush is given the “Three Trials” to complete in order to be come a pirate: thievery, swordplay and treasure hunting.  All three give you the basic concepts for later in the game, when you face the baddy of the game, the Ghost Pirate LeChuck.   Your character falls in love with the governor of Melee Island, Elaine Marley, who is kidnapped by the Ghost Pirate after you complete the third trial, at which time you’re required to get a crew of pirates, a ship and the instructions to the infamous Monkey Island where LeChuck is said to have a secret base of operations.

One of the good parts of this games is there’s really no way to kill yourself or not be able to complete the game.  The game designers did a great job making sure you’d be able to finish the game without getting all the way through the game, only to find out you missed an item at the beginning of the game, and so you have to start over.  The game is broken into three acts and each is really self-contained so everything you need, you have access to at that point of the game.  It’s a really well thought out design, which doesn’t allow for a deliberate dead-end in the game.

One of the other things I really liked was the “default click”.  In previous games, if you came up to a door, you’d have to select the “Open” verb, click the door, and the door would open.  The default click automatically selected the most commonly used verb for an object. This feature made it a lot easier to do things like open doors, talk to characters, or fuck pirates.

The game was chock-full of cool graphics, fun characters and jokes, but I think the insult swordplay had to be one of my favorite parts of the game!   The game is all very tongue-in-cheek humor, which I think is seriously funny.

As part of the “Three Trials” you have to complete a course with a character to learn how to fight using insult swordplay.  When you start, you only have a couple insults at your disposal, so you start with “You fight like a dairy farmer” and the random pirate may come back with “How appropriate, you fight like a cow”.  Whether they come back with the appropriate comeback determines who wins the parlay.   It’s really a challenge at first and you’ll be losing matches left and right, but you start adding new insults and comebacks to your list of options.  It’s really a trial and error against random pirates along the paths on Melee Island in order to be a better insult sword fighter.

One from of my favorites.. “I got this scar on my face during a mighty struggle!” and the comeback? “I hope now you’ve learned to stop picking your nose.”

Interestingly, I was browsing the Wikipedia page and it saids that the insults for the fighting were written by Orson Scott Card, who apparently is a known anti-gay advocates and marriage equality opponent, so I’m pretty surprised he was able to be so funny.  For a homophobe.

After a while, you learn enough new insults and the appropriate comebacks to take on the Sword Master of Melee Island, Carla.  When you defeat her, you get a t-shirt which saids, “I Beat the Sword Master”.  LOL!  Brilliant.

But so much of the games humor is like that.. it’s corny and dry at times, but funny.  For example, you have to get past a troll on a bridge, and he says. “I want something that attracts attention, but is of no real importance” to which you bring him back a red herring.  Get it?  The game has lots of great characters and moments like shooting yourself out of a cannon from a ship on to Monkey Island.  Or pushing a boulder off a ledge on to a catapult which destroys a ship of your lazy crew at sea.

When I originally moved from my Commodore 128D to my Amiga 500, I thought my monitor was going to work from system to system, but as it turned out, the Amiga 500 video was a bit different and I needed a new monitor.  I didn’t have the money to get the new monitor myself, so my mom went to her local credit union.  She took out a small loan for me to help me get that monitor.  It was only $300 at the time, but that was a lot of money for us living in a single income home.  I remember sitting in the lobby of the credit union with her, and she said “They better give me this loan.  I’ve been a member here for 15 years and they’ll be in deep shit if they don’t“.  LOL.

She got the loan and got the monitor for me.  It was very sweet and something I always remember when helping others in need.

One thought on “Secret of Monkey Island”