SimCity 2000 was released in 1994 by Maxis as the successor to the popular game, SimCity.  Now, I’ve never had a chance to play the original SimCity, mainly because I’ve never owned a copy of the game and didn’t have a chance to go back and play it, but SimCity 2000 was a game I spent many, many hours playing with my friend Dustin H during my high school years.

So, in celebration of the new SimCity 2013 game being released this month by Electronic Arts, I’d take some time to recall about my first “Sim” game, SimCity 2000.

I played the shit out of this game on MS-DOS in 1994!  I mean, literally, there are sewer pipes, which are full of shit in this game and some times it overflows because we’d just let the game run!  But seriously, I played this game a lot in 1994 with Dustin as we both liked to build cities for the sake of building large beautiful cities.  I know we’d start playing a city, and leave the computer on over night to see what would happen if we just let the game run and run.

The CHEATS!  I know that I would never have had the patience to play this game without the functions to be able to cheat in this game.  As I mentioned, I wanted to build a huge, beautiful city and money was the root of all evil, so I had a cheat function, I had a program which would allow me to have a billion simoleons!  Money normally wasn’t a problem after that because I could build and build, destroy, and rebuild and never really run out of money.

The game was incredibly detailed for the time.  As the Mayor of your city, you had a chance to build roads, zone for residential, commercial and industrial buildings, putting in power plants, water pumps and sewer systems.  You had the options of highways, subways, trains, tunnels in the transportation department, and there were parks, sports arenas, theme parks and all sorts of other entertainment choices for the Sim to entertain themselves.  I was always amazed at all the possibilities in this game.

Interestingly, as you played the game over and over you’d start to notice patterns.  For example, in order to get your city up and running there were always the same issues in the beginning, like no power or no water.  And I recall, it didn’t really matter if you had half the city drowning in water, the game would ultimately say “The Sims Need Water, Bitch” and you’d have to intervene.  So, the more you played the game, the more you recognized these issues over and over and could intercede more quickly to continue developing your city.

The game is 2D but I thought they did a great job trying to create a 3D prospective.  The environment of the game was this 3/4 top down perspective and could rotate your view to create a 3D feeling, in a time before 3D gaming was the standard.

But the game was still limited by the technology of the time, all the buildings, roads, etc are placed on a grid system.  The grid system would limit you on the size of the building you could place down.  The optimum size grid was like a 6 x 6 plot, which was perfect because most building would fit in that space.

The 6 x 6 grid was this optimum size grid because most of the larger buildings would fit perfectly, but there logic built into the game for the length of grids the Sims would be willing to walk to get to public transit.  If you put a bus stop for example to far away, they wouldn’t walk to the stop and this might hurt your transit structure.  The game was full of these little things, that if you knew them, you could maximize you’re game. 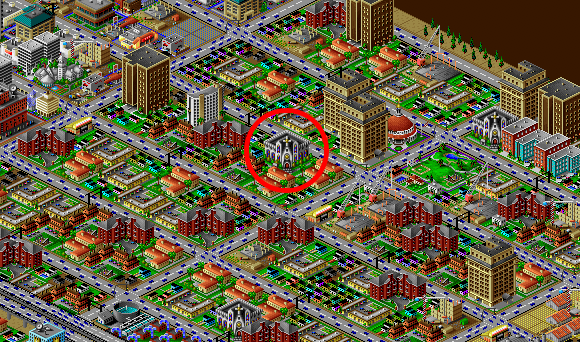 I remember having to destroy churches left and right.  The game was always building churches, which would be fine, but when it placed churches, you didn’t make money because the churches didn’t pay taxes.  Since I was cheating, the money wasn’t really the issue I had with the churches, it was the space each one would take up.  It was a 2 x 2 grid and I recall there was a particular city which had so many of them.  I came back from getting some lunch (I typically let the game run while I was away for a while since it would give the people time to develop and build), and found like 100 churches!  My city looked like Union Hills Road in Phoenix!

So I brought the wrath of GOD on them!  I clicked the bulldozer and started taking them out in droves.. Bam..  Bam.. Bye-Bye!   As an interesting aside, apparently in the original game, every time you destroyed a church it would increase your chance of a natural disaster.  So, apparently Pat Robertson was right, in the original SimCity anyway.