From the Maniac Mansion Deluxe (german)

Maniac Mansion by Lucasfilm Games was one of the first games I ever purchased for my Commodore 128D.  The game developed at LucasArts (known at the time as Lucasfilm Games) was the first of the SCUMM games (Scripting Creation Utility for Maniac Mansion) which allowed game designers to code games using a point and click style, rather then typing in a series of commands like previous games, such as Leather Goddesses of Phobos.  Now the Commodore 128D was released in North America around 1986 and MM was released in 1987, so I must have played this game around 1988-89.

You can select three different characters from a group of characters, but the main and only required character is Dave.  Dave’s girlfriend Sandy has been kidnapped by the local mad scientist Dr. Fred.  Dr. Fred and his family  live in mansion on top of the hill in town, but Dr. Fred is under the influence of an evil meteor.  The meteor fell to the Earth some time ago and has been controlling the good doctor, but there are four other characters in the house: the son Ed, the wife Edna, the Purple Tentacle and the Green Tentacle.  All four of these characters have different interactions with the kids who are breaking into the house.  The main objectives of the game is to save Sandy, free Dr. Fred from the control of the meteor, and ultimately to thwart the plans of the meteor–for world domination, maybe?

When I got the game, I must have played this game quite a few times because I’ve seen pretty much every ending to the game.  I’ve played the Commodore 64, NES and PCs (via ScummVM) versions and each of them has been a little bit different.  Not so much the game play, but the color schemes, detail of the environments, and speed at which Edna and other characters can catch you.  LOL.

In the C64 version, when you come in the house, there’s a beginners trap with Edna standing in the kitchen, which is the first door you go through!  But in the C64 version, you come in to the kitchen and inch over across the screen, you can start her coming at you but have time to escape out the kitchen door and outside the house.  When you go back into the kitchen, she’s gone!  I tried this in the NES version, and “bitch” I got captured!  So, there are some of these little differences I’ve noticed.

The game is a graphic adventure so most of the interaction is completed by finding, saving and using items on other items which allows you to advance the story line.  I love the whole concept and style of the game, but the game, and I’m not sure if this was because of the times or if it was by design, took things a little far sometimes.   For example, you find a cassette tape (how quaint!) in the Green Tentacle’s room, which you pick up, save, and take to the library.  You then put the tape in the tape deck and play the tape, which shatters the glass chandler in the room, which gives you the key allowing you access to more of the Mansion.  But you couldn’t do any of that without getting the items to give to the Green Tentacle so he’d let you pass into the Mansion earlier, but not before you got pass Edna, etc, etc.

It was possible to kill the kids as well or even destroy the whole house with the nuclear reactor in the swimming pool (yeah really, in the pool).  For example, you can pick up a jar and fill the jar with water from the swimming pool.  If you place the water in the microwave, that will cause radioactive steam, and kill the kid who opens the microwave. Awesome! OR, even more fucked up is taking Ed’s hamster, putting it in the microwave and blowing up the hamster!  If you return the bits to Ed, he will kill you!  In every case, when a kid dies, there’s a little head  stone which is placed outside the mansion in memory.  LOL.

And that’s the best part about this game IMHO.  I loved the fact you could play and replay the game with different combinations of the kids and achieve the objectives in the game in a slightly different way.  And in turn, you could be rewarded with a different ending cut scene or dialog.  One of the most annoying part of this game is the fact there are dozen of items, some of which are just there for show, can be picked up, but don’t have anything to do with the main objectives. 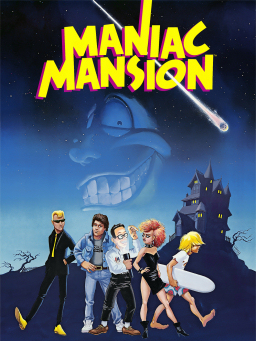 Two things.. Most of the games I had for the C64 I got from a friend, you know legally.  But this was one of the first games I got picked out for myself.  And that meant I had to go to Io Software in Flint, MI.

At that point, Io Software had two locations, but I went to store by the Genessee Valley Mall on Miller Road, in an office building with all these rooms with software for the various systems.  It was pretty stoked, but I remember the selection of games for C64 was pretty limited since the system was on the way out in the personal computer front.  I went in to the store where I met Jeff, who gave me advice on what games would work for me.  Mansion Mansion peaked my interest because of the cool, crazy box image, pictured to the left.  This wouldn’t be the last time I visited Io Software.  I frequently shopping at the store, but I did work there for several years in high school and throughout my second year of college at Michigan State University.

The second thing, Maniac Mansion was the game way I really started hanging around with my new best friend, Dustin H. We had Computer Lab Class together in 7th Grade.  The computer lab was stocked with only Apple IIe, which was pretty impressive at the time.

Dustin had an Apple IIgs and he brought in MM to play on a Friday when the teacher was letting us kick back playing games.  I was watching Dustin play the game, so him and I started talking about MM and computers in general.  I had been playing it for a while so I help him out and he was teaching me some new tricks in the game.  That started me hanging out with him at our houses, playing video games, him teaching me how to work on computers and us working together at Io Software together (he really got me the job).  It was some really good times and might not have happened without Maniac Mansion.