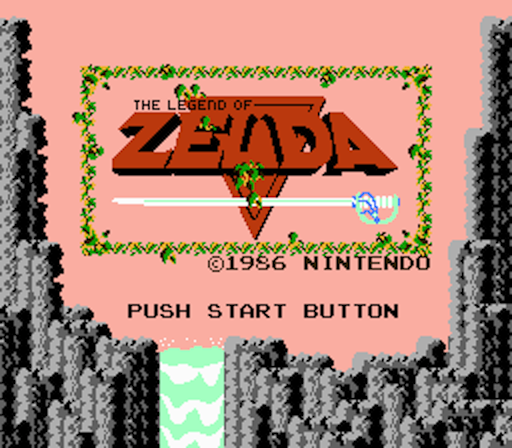 Legend of Zelda (LoZ) was one of the best games I every got for the Nintendo Entertainment System (NES).  I remember the shiny golden case… ahhh.. gold.  It was great way to distinguish the Legend of Zelda from other games, because most of the other games at the had a dull grey color.  The gold cast really got your attention.  I had this feeling this was going to be something really good.  In addition to being gold, LoZ was seriously advertised as part of the NES marketing machine!  My first Nintendo Power magazine covered the second quest,  and later editions always seemed to have hidden item or perk.

I don’t recall where and when I purchased the game, but I know I got the game when it came out in 1988.

Legend of Zelda has a great deal of replay-ability due of the style of gaming.  LoZ is the type of game anyone can pick up and start with very little explanation about how to play or where to go, IMHO.  I played the original game on the NES quite a few times since it was one of my favorite games for the NES.  There always seems to be some thing or some where else to explore in the game.

I own a copy of LoZ for the Gameboy Advance as part of the Classic NES Series, and I’ve completed the first quest on the GBA at least once.

The game was very excessable for the casual gamer which was a huge advantage.  There’s no complicated leveling-up system or magic skill systems to learn.  You start the game with a single character, who has a sword.  As you obtain new items, each of them allows you to advance to the next area or complete a new task you couldn’t have completed without the item.  For example, you obtain a raft in dungeon X.  The primary function of the raft is to allow you access to dungeon Y, which is on a remote island, but the raft can also be used travel to another hidden island to get another heart piece so you can take more damage.

The Old Man with all his wisdom!

There nothing complicated about how the game presents the items to the player or in what way you’re supposed to used.  In other words, a raft is a raft, a ring has some magical properties, etc because in other games I’ve played you get an item and sometimes there’s no clear indication of where and when you’re supposed to use it.  LoZ doesn’t have that flaw.

In addition, some of the items can be used as a weapon and a tool, like the boomerang or the candle.  You can use these items as to pick up items, or light rooms and, in both cases, kill enemies.  You have a good range on your weapon and when your health bar is full your sword could be “thrown” across the screen to inflict damage.

The ability for the player to explore the over world without pre-existing restrictions was a huge selling point to me in this game.  Granted, there are some areas of the map over world which are restricted because you need an item to get to them or you just simply get your ass handed to you otherwise, but the game was very opened ended for exploration.  There are screens in the game you can walk around, search for hidden caves, find secret places, like hearts or stores, talk with the people (who oddly live in caves) and such without a lot of arbitrary restrictions.

I would spend time exploring the maps trying to find hidden items, people and hearts when I was bored or didn’t want to move on in the game.  LoZ didn’t have a leveling up or experiences based strength like Ys or Final Fantasy games did around the same time.  Players had to rely on the health bars (hearts), the quality of the sword, useful items and their shield to protect themselves.  But players had to have skill at avoiding bad guys who wanted them dead!   As I mentioned, those facets of the game made it extremely assessable to me, improving the game’s quality and appeal.

LoZ set a very high bar in adventure category to me.  Players had all these different dungeons to visit, people living in caves to find, areas to explore and items to obtain.  It was this game that got me interested in the Role-Playing or Adventure games, which led Ys Books I & II, Final Fantasy, Wild Arms, and Dragon Warrior.  Later, I often would think of Legend of Zelda when I was playing Ys Books I & II for the Turbografx-16, because of both the type of game play, but also the 3/4 top down perspective.  Classic NES!

4 thoughts on “Legend of Zelda”