Day of the Tentacle: Maniac Mansion 2 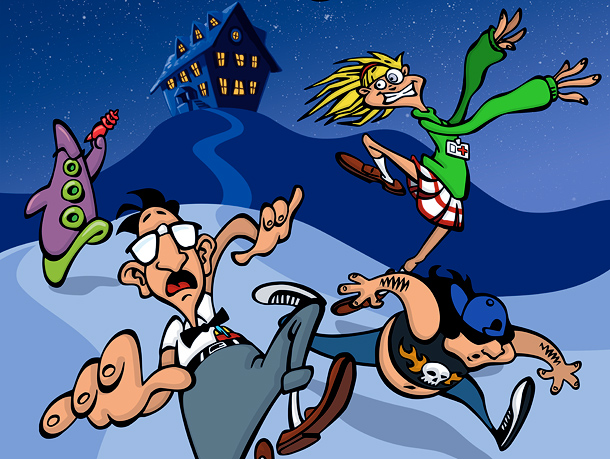 Run from Purple Tentacle!! He’s got a ray gun!

Day of the Tentacle: Maniac Mansion 2 was the only direct sequel to my first graphic adventure game, Maniac Mansion. It’s a huge departure from the original game. The game was released in 1993, it was one of the first games released on both CD and floppy disk at the same time. I played MM2 that year. I got the game for my PC, a home-brew system from CompUSA. I don’t remember how many 3.5 inch floppy disks it came on, but thankfully, I had a hard drive to load the game.

This time around you play three new kids, but you didn’t have the same choice in whom you take with you.  The three kids are Bernard Bernoulli, the nerd,  Laverne, the medical student and Hoagie, the Megadeath lover. The game takes place back in the mansion, but the game does it in a new way both in style and substance.  The Purple Tentacle was accidentally mutated by industrial sludge in the backyard of the mansion. The kids are going in to the mansion to save the two tentacles from Dr. Fred, who is bent on killing them both.  You then find out that the Purple Tentacle has grown arms and is mad with power, and by releasing Purple Tentacle you’ve started the end of human existence.

I’ve completed this game twice straight through. I played it originally all the way through when it came out in 1993, and I played it later on ScummVM with a CD version, which includes the voice acted dialog. I’ve started replaying this game a few times on ScummVM, but if you want to see the whole game as a speed run, check out the YouTube movie below. 🙂

The chance to play the follow up to one of my favorite games ever was pretty nice. And the best part was they didn’t simply make you go through and play the same game again with the meteor as the bad guy.  LucasArts created a whole new mansion, with a new style, a time traveling aspect and added new funnier characters.  This created a completely different game which added a lot to the game play and didn’t require any understanding of the original game to play.

The graphical style of the game was pretty cool at the time. They went with this cartoonish angular style. There was a good deal of animation in the game. The characters all walk in a particular way, which is really impressive. Thankfully, LucasArts had been working on simplifying the interface with fewer verbs and graphic/icon based representations of the items in the game.

The humor makes some best moments in this game.  For example, I especially liked the animation where Hoagie goes into the grandfather clock, you can see his butt crack poking out. It always makes me smile.

Another thing is you pick up need to be transferred from character to character, and each kid is in a different time frame, i.e. future,  present, past. When you send items from one character to another, you flush it in the Cron-o-John. The John makes this cartoonish flushing sound effect which is pretty damn funny.  I loved that.

The voice acted version, which I got on a combo pack of LucasArts Classics 2, was pretty impressive at the time because it was one of the first games I remember having spoken dialog almost all the way through. I did call LucasArts to ask if they would be releasing an Amiga 500 version of the game. The guy on the phone was really cool, but he said the game would require too many diskettes since the game was so animation intensive. I was totally bummed, but looking back at it, I completely understand now.